The World Bank defines a middle-income country as having over US$1045 income per person (2013 GNI Atlas Method). These countries are considered to be rich enough to be able to begin to access forms of finance other than grant aid, such as private sector loans. 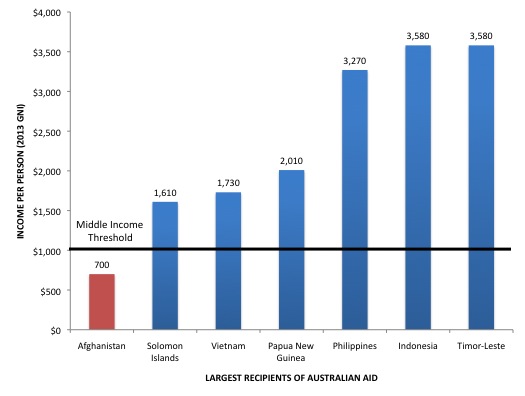 Aid is typically only a small share of the economy in middle-income countries. The chart below shows how most of Australia’s top aid recipient countries are not very reliant on aid. In the case of Indonesia and Philippines, aid is actually a negative share of GNI because more money is spent paying off aid loans than they receive in new disbursements of aid.

Should the region with the poorest countries in the world, which rely the most on aid and have the highest proportion of people in extreme poverty, receive the lowest levels of Australian Aid?