Three years ago the Australian Government released a blueprint for the bilateral aid program in 2015-16 disaggregated by region. The plan was for a geographically diverse aid program that had a presence in the world’s poorest countries, while still clearly prioritising Australia’s immediate neighbourhood. However these spending promises have failed to be fulfilled. Instead, Australia’s aid program almost exclusively focuses on the Pacific and some nearby countries in East Asia. The chart below shows that Africa and the Middle East as well as Latin America and the Caribbean have disproportionally suffered from the aid cuts since 2012.

Potentially one of the most concerning aspects of the retreat of Australia’s Aid Program from its trajectory three years ago is the shift away from the world’s poorest countries. As discussed in this blog, Australia’s aid program was already dramatically disproportionally skewed away from the world’s poor. The latest round of aid cuts is set to exaggerate this imbalance even further.

The latest update from the OECD shows that donors are continuing to slash aid to least developed countries, falling by 16% in 2014 alone. If this trend continues, how will this impact the achievement of the Sustainable Development Goals (SDGs)? What will happen if world leaders fail to redirect this pattern at the Financing for Development Summit in July?

An ODI report released this week tackles these questions head on. The costs of achieving three central elements of the SDGs, ending extreme poverty, ensuring every child receives a basic education and providing universal health care are compared to the financial resources available in low income countries. The best available estimates of the costs involved in reaching these SDGs, from sources such as UNESCO, show that the annual amount required for low income countries is $148 billion. This is significantly higher than the finance available in these countries that is estimated to be $75 billion a year. This figure is a combination of half of these countries revenue capacity and existing aid flows. Revenue capacity is estimated by using World Bank and IMF estimates of the optimal level of revenue that could be collected given a country’s stage of development. Only 50% of revenue capacity and aid flows are used because countries face many costs outside the social sectors, such as infrastructure, and on average OECD governments only spend around half of their revenue on social protection, education and health.

The global financing summit planned in July provides an opportunity to tackle these huge financing gaps required for the achievement of the poverty, health and education SDGs. This analysis identifies that relying on more taxes in low income countries will not be enough to ensure a global minimum standard of living for all. In addition to current levels, more aid will be required to pay for the shortfall.

But is it affordable? There are at least three reasons to believe that it is entirely affordable for the world to provide the additional finance required for low income countries to reach the SDGs:

To find out more check out the report available at: http://www.odi.org/financing-future

Each year the Centre for Global Development, an international development think tank, ranks rich countries based upon how their policies enable or inhibit development in poor countries. The seven factors included in the index relate to Aid, Trade, Finance, Migration, Environment, Security and Technology. The latest rankings released in early January are shown in the Figure below.

The index measures rich countries commitment to international development beyond comparing aid levels alone, which dramatically alters the rankings of some countries. Luxembourg falls from 1st place based upon aid as a share of GNI to 18th place based upon the more comprehensive index. While Portugal moves much higher up the list to 6th place compared to 12th place when comparing just aid.

Importantly, this index shows that rich countries could be doing much more to contribute to international development. Every country performed poorly in at least one of the seven factors included in the index.

For most of human history, extreme poverty was the norm. This only began to change in the last couple of centuries as some countries (largely in Western Europe and North America) experienced prolonged periods of economic growth.

Rapid economic growth in China led to the same increase in income per person, which took the UK 130 years, in just 25 years. This has led to hundreds of millions of people escaping from extreme poverty.

To get a more holistic understanding of how living standards have changed over time, it is important to go beyond the income per person measure. Advances in medicine have allowed for higher levels of development for a given income level than what today’s developed countries experienced in the 1800s. For example, in the UK in the early 1800s, every second child died before the age of five. While around one in seven children die before five in Africa today.

Next month, World Leaders will discuss the next Millennium Development Goals and whether to include a timeframe to end extreme poverty by 2030. This is a truly historic moment in human history as it was really only a couple of centuries ago that extreme poverty began to be permanently reduced.

The World Bank defines a middle-income country as having over US$1045 income per person (2013 GNI Atlas Method). These countries are considered to be rich enough to be able to begin to access forms of finance other than grant aid, such as private sector loans.

Aid is typically only a small share of the economy in middle-income countries. The chart below shows how most of Australia’s top aid recipient countries are not very reliant on aid. In the case of Indonesia and Philippines, aid is actually a negative share of GNI because more money is spent paying off aid loans than they receive in new disbursements of aid.

Should the region with the poorest countries in the world, which rely the most on aid and have the highest proportion of people in extreme poverty, receive the lowest levels of Australian Aid? 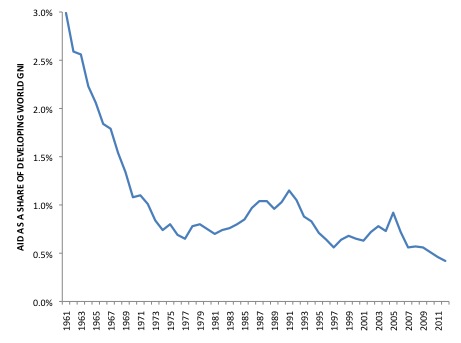 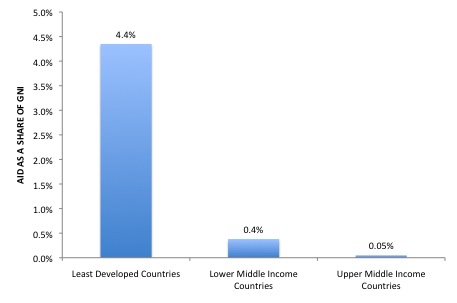 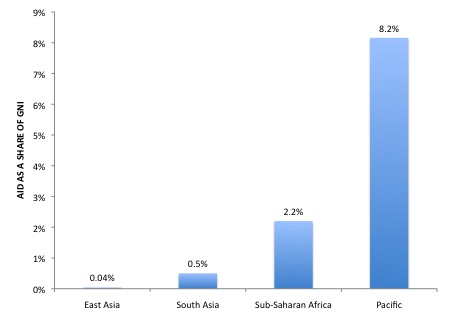 On average, there is little reason to believe that developing countries are too dependent on aid. However for some countries this concern may be more valid. For example, the Solomon Islands have received around 40% of GNI in aid for the last decade.